Bill Anderson broke into the television game by hosting The Better Sex and appearing on the popular soap opera, One Life to Live. He also hosted Opry Backstage and appeared on numerous other shows including The Tonight Show and Hee Haw. He has now been hosting Country’s Family Reunion for 10 years. Born in Columbia, South Carolina, a career in Country Music was not exactly on Bill Anderson’s professional radar until college. While attending the University of Georgia and pursuing a degree in journalism, he took a job as a radio DJ and began trying his hand at singing and songwriting. At age 19, he wrote “City Lights,” which went on to be recorded by Ray Price and later Mickey Gilley. This prompted him to move to Nashville, Tennessee, and sign a recording contract with Decca Records. The early 1960’s produced his most well-known songs including “That’s What It’s Like to be Lonesome,” “Tip of My Fingers,” “Mama Sang a Song,” and “Po’ Folks.” Anderson also broke into the television game by hosting The Better Sex and appearing on the popular soap opera, One Life to Live. He also hosted Opry Backstage and appeared on numerous other shows including The Tonight Show and Hee Haw. He has now been hosting Country’s Family Reunion for 10 years.

A Tribute to Merle Haggard

A Tribute to Ray Price

Salute to the Kornfield 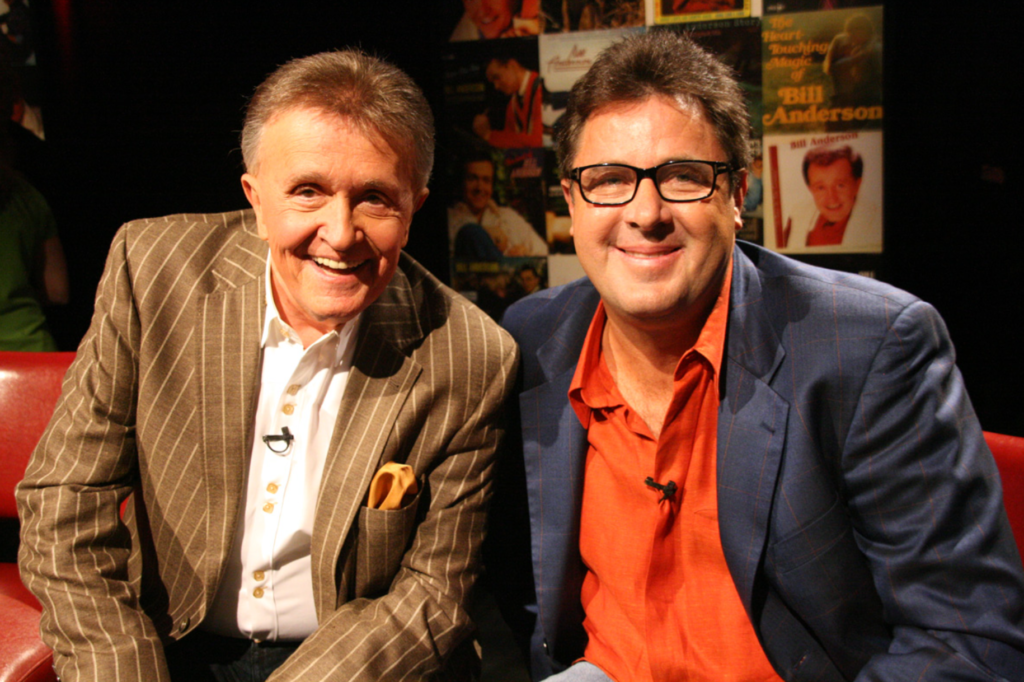 Bill Anderson (born William Hugh Anderson, February 10, 1936) is an American country music singer and songwriter. He is known for penning the 1966 hits “Still” and “Mama Sang a Song”, as well as having multiple hits of his own in the United States and Canada.

Born in Clinton, Iowa, Anderson grew up listening to country radio stations out of Des Moines and Omaha, Nebraska. In high school, he was on the wrestling team, where he started developing his love of music. He graduated from Indianola High School in 1954 and then attended Drake University for one year before transferring to Oklahoma State University (OSU). At OSU he joined Phi Sigma Kappa fraternity, where he met fellow OSU student Roger Miller. He earned a degree in animal husbandry from OSU in 1958.

In 1956, Anderson sang on KOMA Radio in Oklahoma City with Roger Miller; this was his first experience as a vocalist on radio.[1]

Anderson signed with Starday Records after graduating from college in 1958.[2] His first single release was “Truck Drivin’ Son-of-a-Gun”/”My Baby’s Gone” followed by “Thanks A Lot For Tryin’ Anyway”.

Where is Bill Anderson from?

Bill Anderson is from a small town in the state of Texas. He now lives in Nashville, Tennessee.

Bill Anderson was born in the small town of Athens, Texas on February 8th 1939. He was the oldest of three children and grew up with his parents and grandparents on a farm outside of Athens. His father was a farmer and his mother worked as a secretary at a local bank. The family moved to Dallas when Bill was eight years old and Bill’s father opened a grocery store there. Bill had always wanted to be an entertainer but his father wouldn’t let him audition for talent shows or take any acting lessons because he wanted him to focus on school. However, when Bill graduated high school he decided that he wanted to pursue music so he joined the Navy for two years so that he could travel around the world before going back to college.

How many songs did Bill Anderson Write?

Bill Anderson has written and recorded more than 1,300 songs during his 50-year career. He has had more than 30 hit songs, including “City Lights,” “Tips of My Fingers,” “That’s How I Got to Memphis,” “I’m Just a Country Boy in Love” and “Still.”