Riders In The Sky

Riders In The Sky is an American Western Music and Comedy group which began performing in 1977. Their family-friendly style also appeals to children, and they are sometimes considered a children’s band, though their format does not appeal exclusively to children. They have won two Grammy Awards and have written and performed music for major motion pictures, including “Woody’s Roundup” from Toy Story 2 and Pixar’s short film, For the Birds.

For forty years Riders In The Sky have been keepers of the flame passed on by the Sons of the Pioneers, Gene Autry and Roy Rogers, reviving and revitalizing the genre of Comedy & Western. And while remaining true to the integrity of Western music, they have themselves become modern-day icons by branding the genre with their own legendary wacky humor and way-out Western wit, and all along encouraging buckaroos and buckarettes to live life “The Cowboy Way!”

40 years ago. No laptops, no cellular phones, no Google, no downloads, no Skype, no Tweets, no Apple, no Microsoft, no texting, no electric cars, no Uber. A different world. But there were three young men with drive and wit who wanted to keep a special music alive. They believed in preserving the heritage of Western Music and presenting it to a new generation. They believed in entertaining, and they did so… entertaining themselves as well as the audience! And they believed in creating original Western Music to continue the tradition, not just seal it in amber as a museum piece.  What they did not realize at the time was that they would be doing the same thing 40 years later.

40 years ago, Ranger Doug, Too Slim and the late Windy Bill Collins played that first date on the bitter cold evening of November 11th, 1977 at Herr Harry’s Frank N’ Stein Rathskeller in Nashville, and small listening room dates followed. By August of the following year demand was building, and while Windy Bill left, Woody Paul joined, and the true professional beginnings of the band began at the Kentucky State Fair, where the trio played 10 days for $2500- and bought their own rooms and meals out of that!

A first wave followed, including appearances on Austin City Limits; recording contracts with Rounder, then MCA, then Columbia; guest appearances on the Grand Ole Opry leading to membership in 1982; and a three-year run on The Nashville Network with a TV show called “Tumbleweed Theater,” which yet in turn led to a seven-year run on public radio with “Riders Radio Theater.  People Magazine, interested in the Riders phenomenon, ran a story which happily caught the eye of a Hollywood producer.

And so the second wave broke, sending the boys to Hollywood to star in “Riders In The Sky” on CBS for a year on Saturday mornings, introducing them to yet another generation. More recordings, endless show dates, and television appearances followed for a decade before the fine folks at Pixar called and asked the quartet – by this time they had been joined by Joey the Cowpolka King – to sing a tune called “Woody’s Roundup” in the movie “Toy Story 2.” Thus, the third wave began, highlighted by a number of projects for Disney, including two albums, both of which won GRAMMY Awards!

The creation of satellite radio has recently given them a new platform, as they continue to produce episodes of the award winning “Classic Cowboy Corral” on Sirius/XM.

Still more road dates and recordings (several on their own Riders Radio Records label) and other film and television projects have filled the days and weeks and years, and since the quartet has slowed up very little, the numbers begin to add up: an astonishing 7,200+ appearances, 35 years on the Grand Ole Opry, 40 records albums (well, now CDs,) and tours of all 50 states and all over the world. Honors accumulated as well. In addition to the two Grammy Awards, Riders received numerous awards from the Western Music Association, including the highest: membership in the Western Music Hall of Fame; numerous Wrangler awards from the Cowboy Hall of Fame and Western Heritage Museum; awards from the Academy of Western Artists; enshrinement in the Walkway of Western Stars, and more. What began as a celebration of classic Western Music and an evening of hilarity has become a career, and that career has become a legend, one which, 40 years on, shows no signs of stopping or even slowing down much.

Ranger Doug, Too Slim, Woody Paul and Joey the Cowpolka King… 40 years on, “The Cowboy Way.” 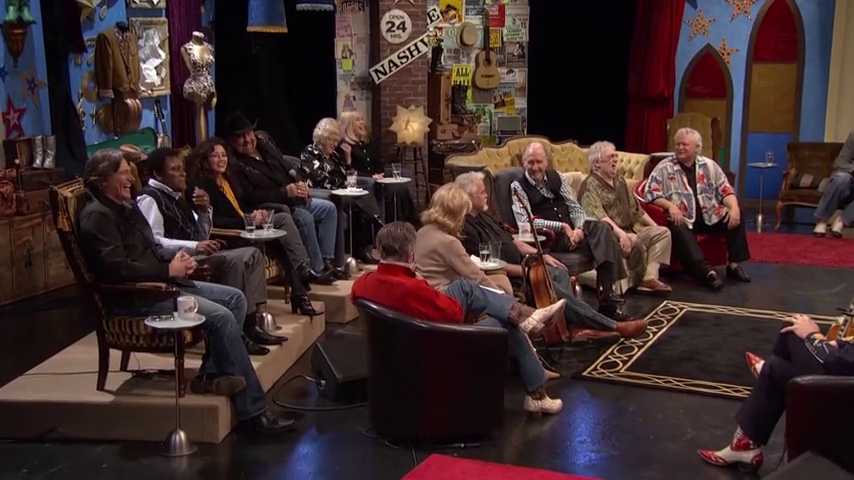 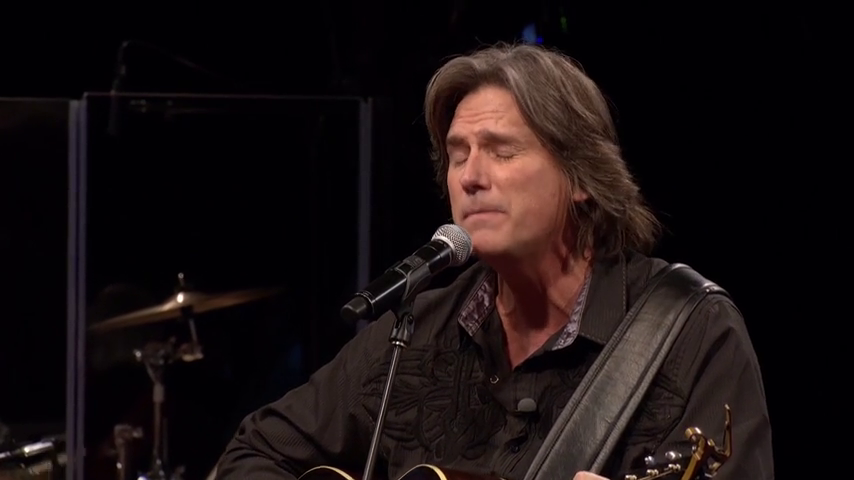 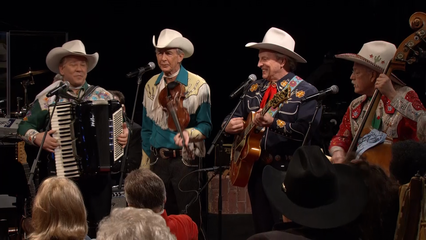 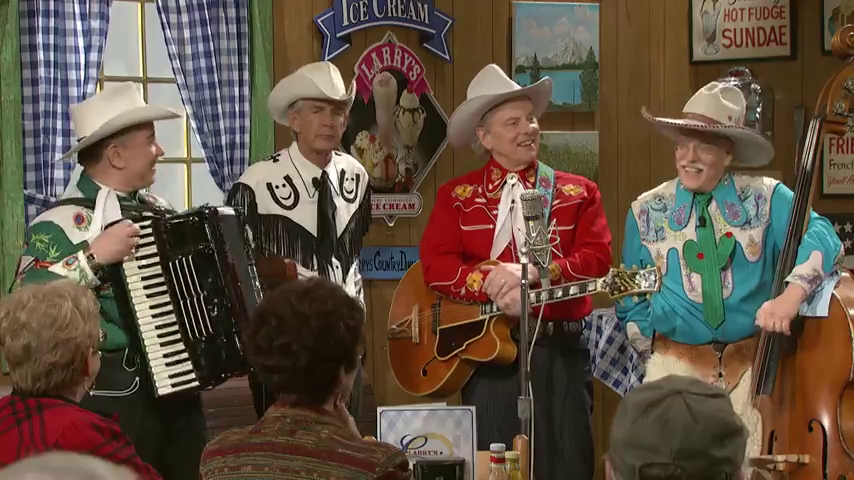 Episode 3 Featuring Riders In The Sky 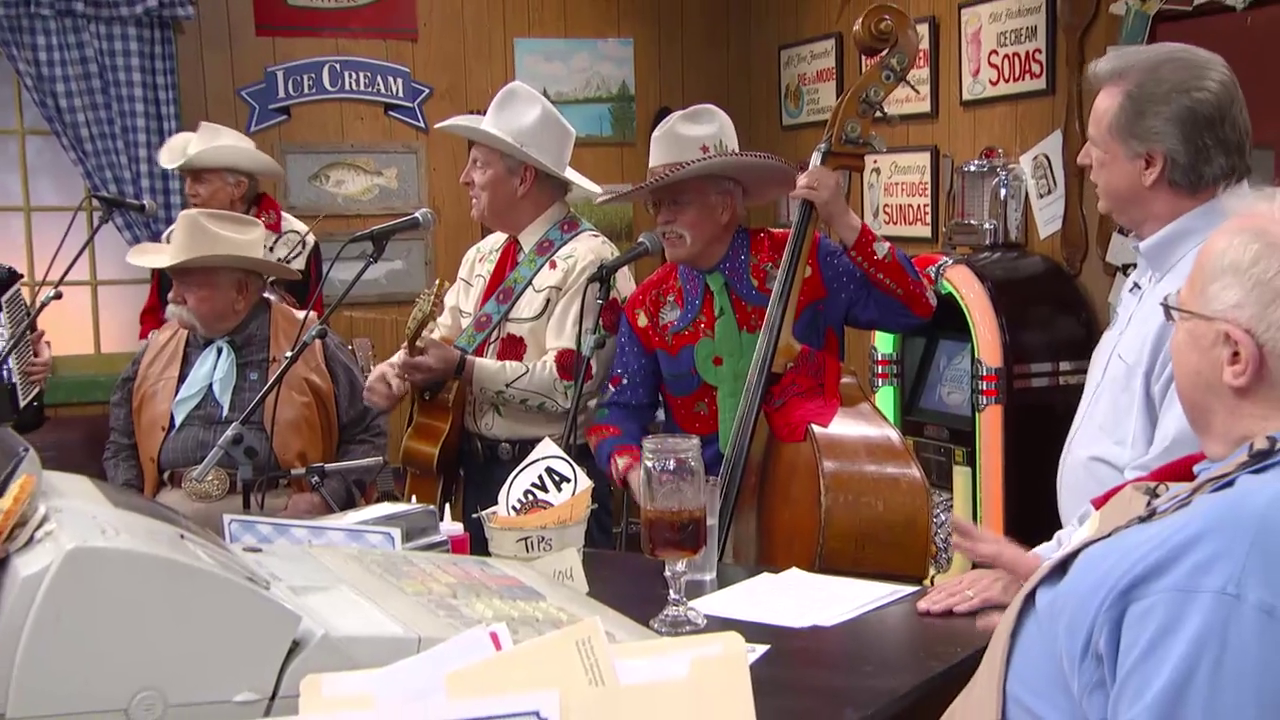 Episode 2 Featuring Riders In The Sky with Wilford Brimley 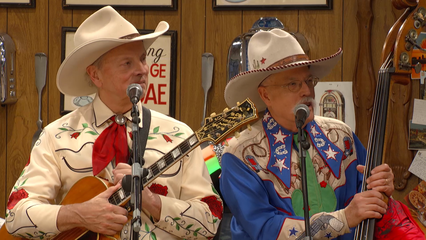 Episode 2 Featuring Riders In The Sky 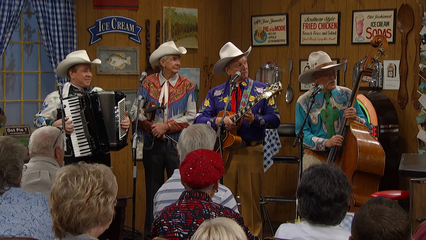 Episode 5 Featuring Riders In The Sky 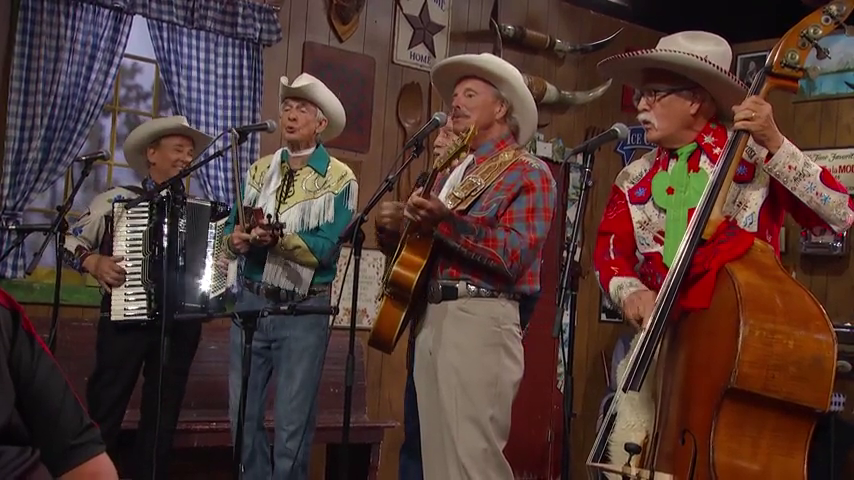 Episode 3 featuring Riders In The Sky